After some minor controls hiccups, I got tcopter flying.
Thanks to Annie for filming.
One thing I noticed right away about the flight was that it was less floaty, zippy.  It seemed sluggish compared to beforehand.  Now, the setup is a bit heavier than last time, but only by maybe thirty grams.  Then again, that's about 15% more than last time.  Too bad Newton wouldn't let me get away with that.

Each experience I have like this reminds me to KEEP THINGS LIGHT!  When they're light, they take less force to move, so they can stay in the air longer.  Of course, I could slap on a bigger power system to give it more force to thrash around, but then the frame would have to to be built (heavier) to withstand the extra force.

I'm currently looking into solutions for making a really light frame that can still take some abuse.  One trick that I learned from some friends in DBF was to sandwich end-grain balsa wood between sheets of carbon fiber.  It makes super light (not much heavier than balsa) and very stiff spars.
After I have some more lab experience, I'd like to try using these as arms.   I bet I could make the whole frame that way.  But for the time being, I might just try balsa arms.  Balsa is pretty brittle on its own, so I'll probably reinforce it with some kind of stiff fiber (thin strips of bamboo?).   Also, I want to keep this project accessible to DIYers without going over the top with high tech materials.

In other news, I've been having a lot of fun with the ukulele (when it's in tune).  The nut is slightly angled, so the distance from it to the first fret is just a bit longer than it should be for the low string.  I made a quick fix by sticking a chunk of bamboo under the string shoved up against the nut. 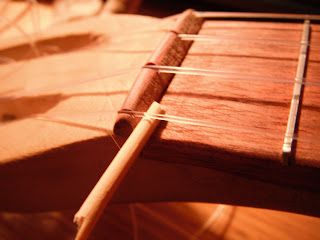 I'll rip the nut off and re position it later.
Also, I've noticed that some of the drier days make the pegs shrink and slip.  I can still tune them, it's just a bit more involved than I'd like.  Being that it's IAP, I drew up some plans for machine tuners: 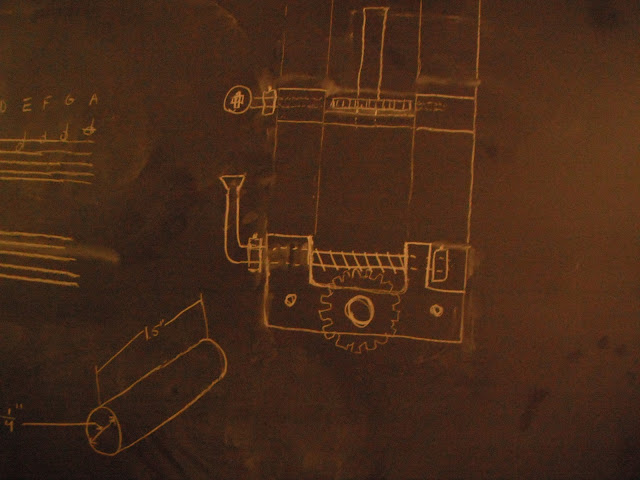 I planned on using a drywall screw as the worm gear, filing off the unnecessary bits of screw.  I was also thinking of cutting the large gear myself.. with a hacksaw.  This will have to wait for another long weekend, because I fear it will take many hours.
Before you tell me that I can buy cheap and much nicer machine heads for a few dollars each, just let me say that my stubbornness to buy as little and make as much as possible for this uke has held strong.
Machine tuners will happen.
Posted by nkirkby at 4:13 PM