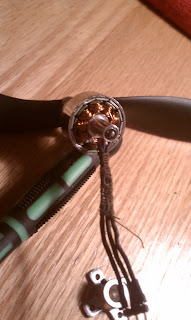 Tiny motor is tiny!
Currently the only thing stopping T-copter from flying is this flukey motor. It arrived with a broken wire, but luckily the break was somewhat exposed and I was able to solder it back together.
I somehow managed to break that connection and another while removing it from the antiquated tricopter frame.  d'oh!

Being stubbornly frugal, and having never wound a stator before, I decided to try and rewind it rather than dropping a mere $9 on a new one.

The wonky motor wires on the left are held together with thread and superglue after the first surgery. 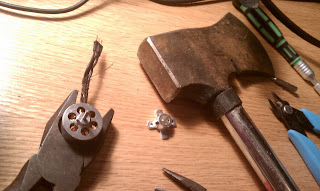 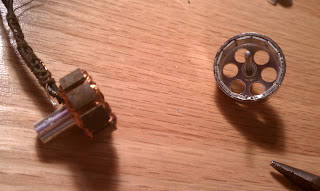 I had no hammer, but a toolcomm hatchet was happy to help in loosening the press fit shaft.  A tiny E clip held the shaft at the mounting end of the motor, and the bell hangs on to it with a pair of unreasonably tiny set screws. 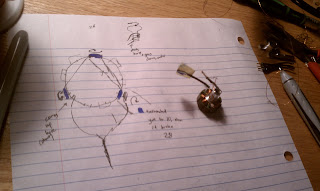 I made sure to diagram carefully while unwinding.  I believe this is a delta winding.  The stator has nine poles, and each length of magnet wire wraps around three of them.   I counted 28 turns around each pole. 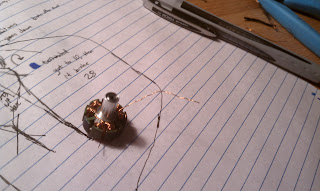 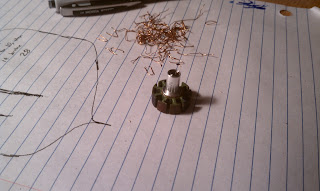 ...more unwinding.  The windings were messy and glued, so after I got the scheme of things, I just went at it with wire cutters. 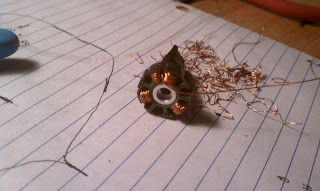 Here's my first attempt at winding.  The wire I used (28 gauge) was just ever so slightly thicker than the original, so I started running into problems when I started winding adjacent poles.

It was at this point when I realized I had very little knowledge of what all of this meant, so I begged Julian for help.  He explained that the number of winds plays a part in determining how much torque the motor can produce.  More winds means more torque, at the cost of top speed. 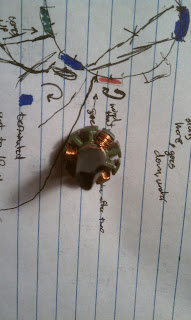 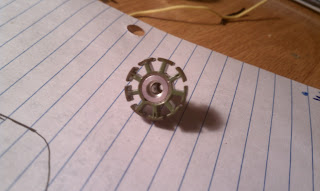 T-copter values torque,  so I opted to go with a lighter gauge wire to pack more winds on there.  I unwound the stator to start again.

This time, I used 30 AWG magnet wire.  It seemed a tiny bit thinner than what was originally used, but that should be okay, because it's presumably of higher quality than the shady wire that is used to create nine dollar motors. 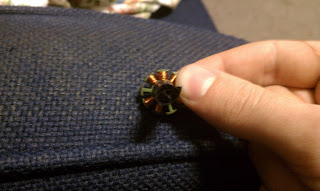 I did 30 turns around each tooth.  I probably could have fit a couple more, but that'll have to wait until next time. 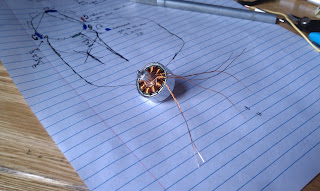 Done and tapped back together!
A check with the multimeter says there are no shorts, and each of the resistances are the same.  With any luck it will work.  Testing report to come
Posted by nkirkby at 10:30 PM