It's taken me a while to realize that a "Y" style frame may not be the best for my tricopter.  Because the props are mounted upside-down, there isn't much space left for the battery left underneath the center of the frame.  There's enough space, but a triangular frame makes it awkward to mount the battery without extra hardware. 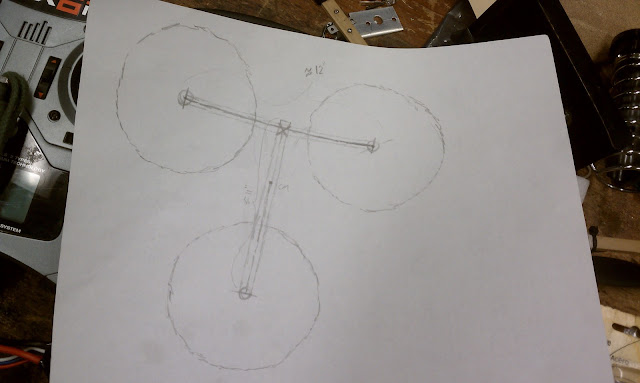 just look at that sexy orthogonality.

This new frame holds the motors in the exact same positions as the last one, but it should give me more "hard points" for mounting things.  The battery is attached in the middle of the T, just under the geometric center.  It requires only one velcro strap to hold it in place as opposed to the confusing and not-all-that-effective pile of straps and pieces of foam in the last version. 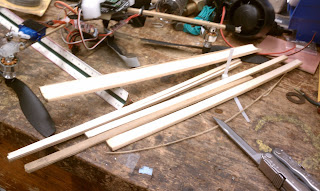 I cut some more pieces of bamboo from a long (stalk? shoot?) with a flush cut saw and then split them lengthwise and cleaned them up with a knife.  MITERS doesn't really stock high tech aerospacey materials like carbon fiber and end grain balsa, but they do have bamboo. 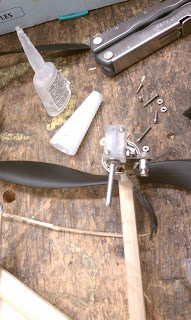 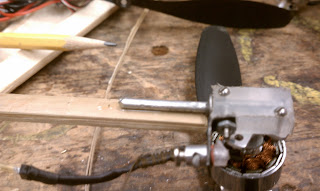 I tore the old yaw assembly off of the old frame and positioned it on the new one.  When it comes to fastening things, I'm a big fan of wrapping and gluing.  The shaft that the motor block pivots on is an aluminum rivet.  To attach it to the frame, I tack it with a drop or two of CA (superglue), then wrap the two together with some thin and flexible steel wire (the kind they use for hanging pictures).  After dousing that with a bit more glue, it gets very strong and stiff. 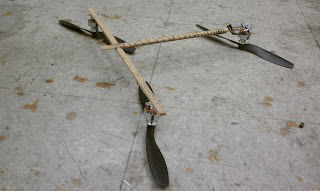 After I attached all of the motors, I noticed that the longer beam (the vertical of the 'T') was a bit flexy.  I'm probably overbuilding, but I lashed another thin piece of bamboo to the underside of the beam in question.  After gluing, megastiffness was restored.

I put all of the electronics on to test (it hadn't been started for a while), but the rear motor wasn't really working.  It just jerked around like it had before when one of the windings was broken.  Derp.  I guess I didn't do a very good job soldering it back together last time.
Anyway, I'll take care of that soon and hopefully get it in the air.  I don't expect flight characteristics to change that much.  Hopefully not-flight (crash) characteristics will be improved though.  :)
Posted by nkirkby at 2:19 PM