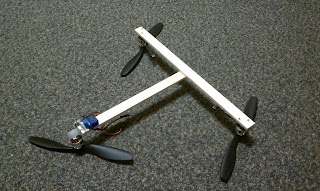 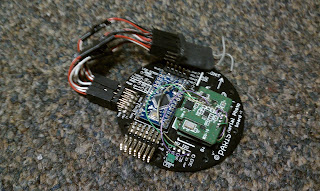 after feeling the difference that only a few grams made in the last flight of tcopter, I'm going to try and make it super light and floaty again.  I switched the motors and props over to a balsa frame (still T-style).  The balsa has a much bigger cross section, but is still very much lighter than the bamboo I used before.  While moving the electronics over, I realized that a lot of the wasted weight is in the shield.
The shield is a clunky 2mm thick fiberglass board that neatly connects the arduino to the sensors and speed controllers.  It keeps things tidy, but it's not worth the weight. 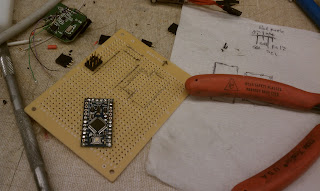 After desoldering stuff, I started with some protoboard.  Jordan urged me to learn Eagle so I could print a nice board, but I really wanted to get tcopter flying, so that will have to wait.
I sketched out the profiles of the components to position them properly.  I got rid of the unused pins that were soldered on to the other board, and that pesky LED that just mimics the one built into the arduino. 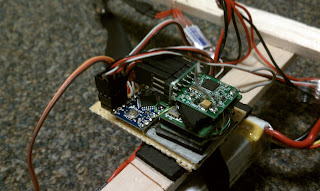 Now the sensors sit right next to the arduino.  They're mounted on foam tape.  The receiver is foam taped to the top of them to add some mass to the stack and hopefully dampen vibration a bit more.

I'm pleased with the compactness of this setup.  It gives only the functionality that tcopter needs without the bulk of the previous setup. 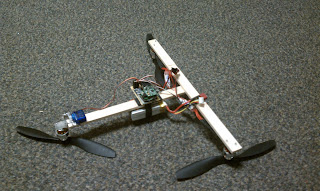 Barebones-copter!
Using a crude balance, I determined that the battery weighs almost as much as the empty frame.  Sweet!  In an ideal setup, I suppose almost all of the weight would be the battery.  I'll have to use the scale at MITERS to get some numbers on this thing, but it sure feels lighter.  And while I'm certain the frame has shed a few grams, I'm curious as to how the balsa will hold up to crashes.

Only time will tell.