after not one, not two, but three complete failures at composite layup, I decided to switch approaches.  Using some high-tech material which appeared in MITERS after a neighboring shop was being cleaned, I made a new deck.  The material is aluminum honeycomb.  It appears to be bonded with some sort of epoxy (does well under heat) to two sheets of ~2mm thickness. 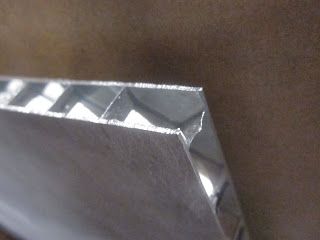 I debated for a while whether it was worth bending up the ends to give the trucks the necessary angle, or if I should just leave the deck flat and machine some angle brackets to go between the trucks and the deck.  Bending the deck beyond its 'elastic' region crimps the material, leaving a very weak joint.

I had some faith that bending the material was not unreasonable, provided there was some sort of bracing to go on after the fact.  I opted to bend, as it would bring the deck closer to the ground and give the rider a bit more stability --> necessary if they're going to get pulled sideways by a kite! 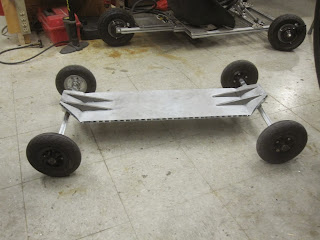 I machined in parallel four brackets, calibrated to an approximate angle of 30 degrees.  The brackets also receive the four cap screws which hold the truck assembly on.  I drilled and tapped the holes after gluing the brackets in to place. 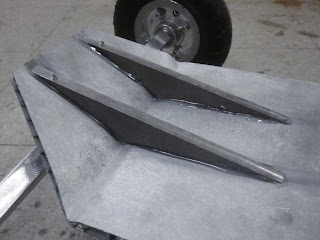 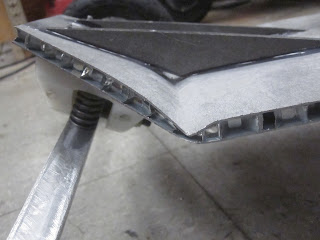 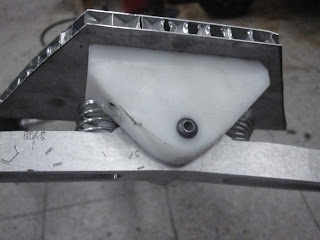 Oh, right.  gluing.
Yes, the angle brackets, as well as the square extrusion making the spine of the board are all attached with hot glue.  When pieces to be joined are cleaned well and heated uniformly above the 'melt' point of the hot glue, a very strong bond can be made, using the hot glue to 'braze' the materials together.  I believe the bond is purely mechanical, as hot glue does not undergo any chemical reaction during the gluing process. 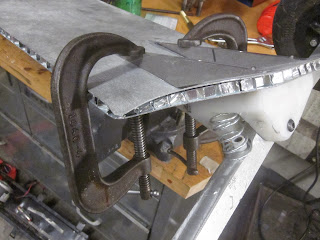 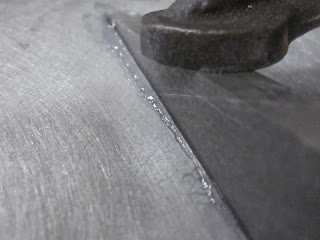 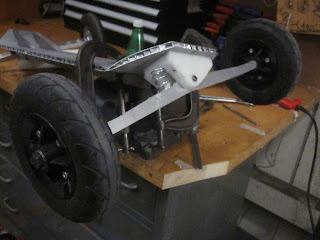 I took it out into the hallway to whang on it and test the joint.  The honeycomb makes an unsettling crinkling noise as it flexes. I think this is caused by popping in the walls similar to the pop-top on a vacuum sealed container.

needs footstraps, proper testing
Posted by nkirkby at 12:22 AM