I first saw these on youtube a while ago.  They're lamellophones just like the mbira, except made out of wood.  Having recently crufted some nice-ish wood, I traced out a pattern, figuring that if I made the tongues roughly different sizes, I could tune them later. 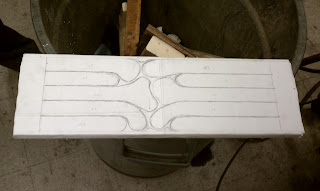 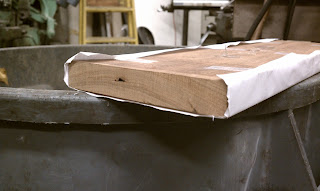 The coping saw sure is a nice tool.  You can take the blade out and thread it through something (such as a drilled hole), creating a pocket. 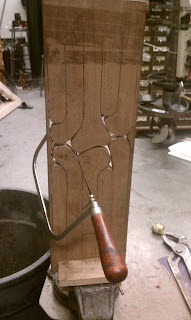 I'll admit, I cheated and used an electric scroll saw for most of the rough cutting.  I'm not good enough with the coping saw to cut very long lines while keeping them square.

After making a box for it to rest in/on, I tried it out with a rubber mallet.  It's very quiet, almost inaudible.  I think I'll have to thin out the base of each tongue to make them less stiff.

11/7/12 This project is shelved for a while until I get my woodworking situation worked out.