A few days ago, I started building an ukulele.  I've wanted to attempt a stringed instrument for a while, and winter break seemed like a good time to start.
First, I browsed uke pics to get an idea of the proportions.  I learned from Wikipedia that ukuleles are classified by size.

I settled on a tenor because I figured I could get away with larger tolerances, but I still wanted some degree of portability.

I first found some diagrams to get an idea of scale.  A search turned up this diagram of an ukulele neck, and I  used this as a template for mine.


A great little program called FretFind helped me layout the locations of the frets, as well as sizes of the neck, nut and bridge. 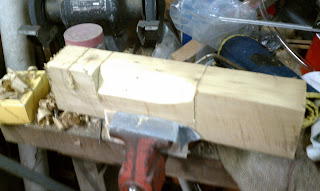 I started by carving the neck out of a chunk of tulip poplar.  I made rough cuts with a pruning saw then followed up with a chisel and a gouge.  It's a pretty soft wood with a dead straight grain.


I'm using a machinist's vise.  I duct taped some thin ply scrap to the jaws so it wouldn't mark up the wood 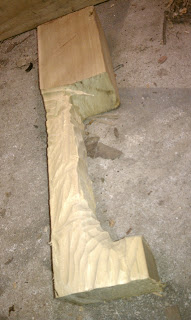 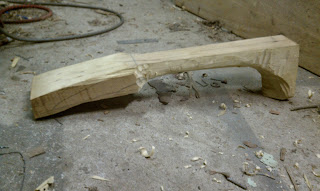 done with the first round of chiseling. 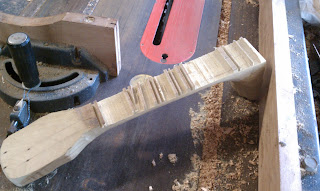 I wanted to inlay a fretboard, something a bit more durable and nicer looking than the poplar.  To make room for the inlay, I set the blade on the table saw to about 3/16" and took some slices out of the top of the neck.
After that, it was easy to clean it up and flatten it out with a straight chisel. 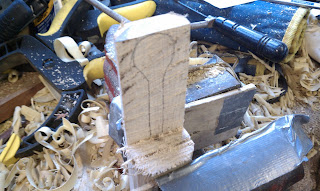 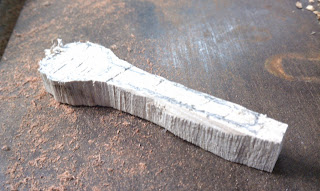 I opted out of using geared tuners since the tension on the strings won't be anywhere near that of a steel string guitar.  Instead, I made wood tuning pegs.

That's a small piece of white oak that I sloppily cut with a coping saw.  I whittled it down with a knife until it stopped looking so boxy, but it still wasn't round enough. 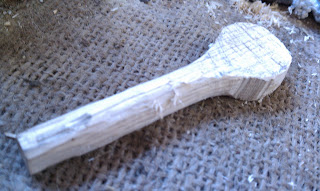 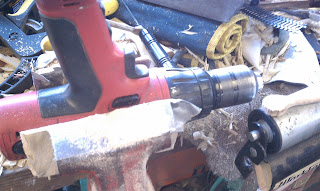 I hesitate to use the word lathe...

Enter the inverted cordless drill in a vise!

This worked surprisingly well.  I'd put the smallest end of the peg in the chuck, operate the drill with my left hand, and manipulate a chisel with my right.  I don't know the technical name for it, but I used a roller that's supposed to support long pieces of stock as the thing that I rest the chisel on. 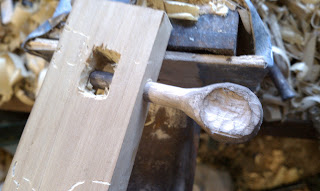 Here's a little test head I made so I wouldn't ruin the real one.  The outer hole is drilled to something like 9/32".  The inner section is first drilled to 1/4", then the opening is expanded just a bit to 17/64".  I can approximate a taper that way.  I used calipers when sanding the peg in my "lathe" to match the taper of the hole.


The peg is a bit blackened in this photo because I rubbed it in coal dust.  That seems to give it a bit more of a hold.

Back to the neck 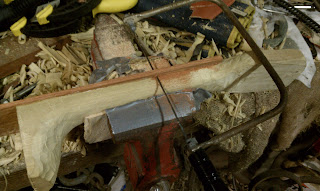 I trimmed the excess inlay from the neck with my trusty coping saw. 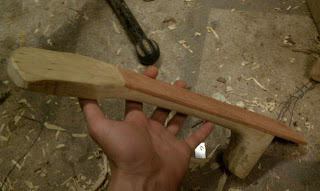 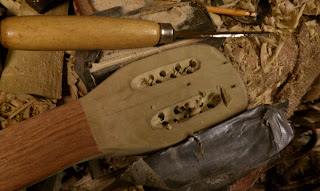 With that done, I started shaping the head to accept tuners.  I bored some holes and chiseled the rest. 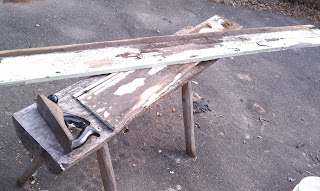 I read somewhere that cedar makes a good soundbox, so I dug through a stack of some old cedar siding that used to be installed on our house until I found some sufficiently not rotten pieces.

They're about 7/8" thick on one side, then they taper down to 1/4" or less on the bottom.  I wanted the sides of my box to be thin, less than a quarter inch.  I got to work with a plane to get them down to size.

It took a few hours.  If I'd had access to a proper woodshop, I probably could have done it in a few minutes. 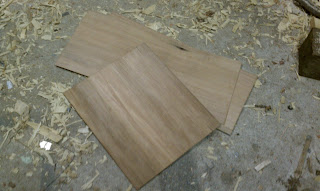 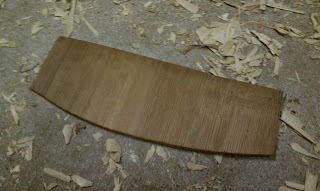 Here's the tail end of the box