I somewhat awkwardly picked up my Tempur-Pedic Sample Kit from the mail today.  While I may someday be interested in the purchase of a mattress of theirs, today is not that day.  I'd read elsewhere on the internet that the  Tempur-Pedic mattress foam makes a fantastic vibration damper, and indeed it seems to. 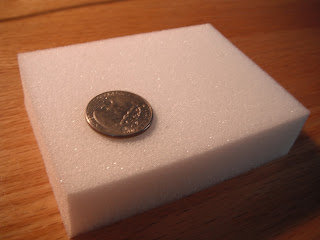 The sensors on a multicopter need to be fed the motion of the aircraft as accurately as possible, and things like motor vibration, and oscillations in the frame and booms tend to screw up those sensor readings.  I did a simple test by placing my phone on my desk, asking it kindly to record its accelerometer readings, then banging on the table.  I did the same with a chunk of foam underneath it, and all of the nasty spikes in the data went away.  Cool.
Last night at MITERS, I slapped together a quick and nasty frame. 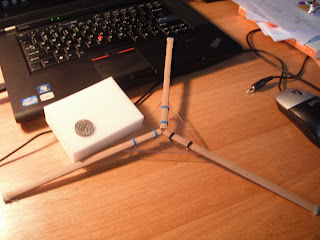 I was searching for compositey stuff to make arms from, when I spotted some bamboo.  Many people use wood arms in multicopters, so bamboo could have potential.  It's pretty light and strong, and it's a heck of a lot cheaper than carbon fiber or even fiberglass.  I was worried it would split at the end (rather like composites tend to) so I wound some thread around it and CA'd it solid. 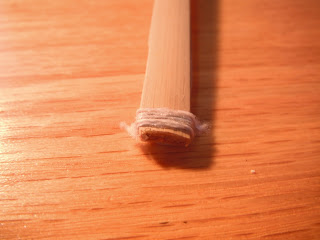 We'll see if the booms are as fantastic as I'm hoping they'll be.  If they're not super stiff, I might try layering and gluing multiple pieces to get a bigger cross section.  Hrrm, bamboo composite could be interesting. 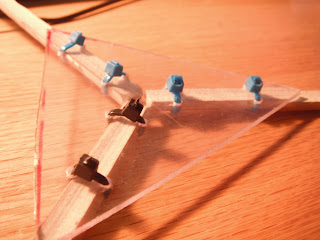 To get those beautiful 120 degree angles, I sloppily cut out an equilateral triangle from thin acrylic sheet and drilled some holes in it for zip ties.  The sheet is another source of flex in the frame.  If my other components turn out to be so heavy as to make the flexibility a problem, I'll probably add a second layer of triangle.  Standoffs between the two layers would let me mount sensitive electronic things in there instead of leaving them out in the open.
Anyway, as soon as my parts get here, I can get a better idea of the scale and proportions of what I'm making.  For now it's just prototyping for funsies.
Posted by nkirkby at 12:33 PM