I got a railroad forge from craigslist a few years ago.  beautiful flywheel, but rather rusty.  I ran the blower on an electric motor for a while instead.  I decided I wanted less noise and more control.  There are a few variations out there for people powered blowers, one of the most common being the hand-crank blower.
This one is a bit rarer as far as I can tell.  Perhaps that's because of its relative mechanical complexity.  However, unlike all of the hand-crank blowers that I've seen, it does not require gears.  It's all belt driven. 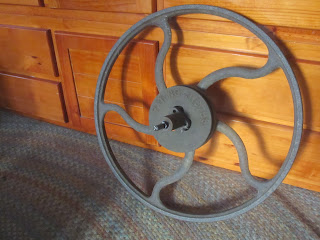 the flywheel assembly was all rusted together, all one with the steel shaft.  I was certain that it was some kind of clutch, just not entirely sure what of it was meant to spin independently on the shaft. 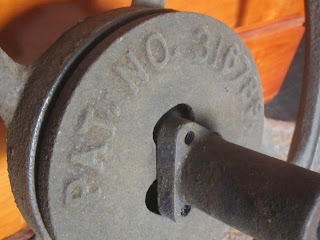 fortunately, the patent number is cast into the side of the thing in big letters.
so I looked it up. 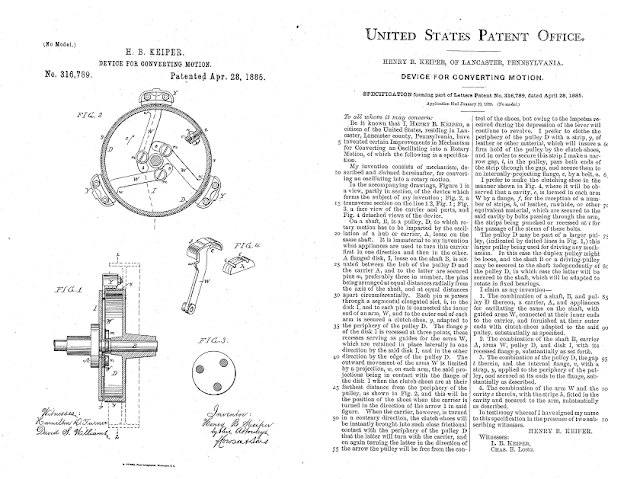 I contest that this is better than a user's manual.
it says that the flanged disk (I), and the carrier (A), are both to spin freely on the shaft.  They were so horribly seized on there that I figured the best option would be to tear the assembly down and press it apart. 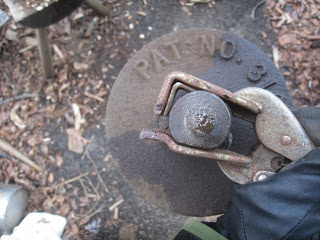 The flywheel came off easily.  Some vise grips made for welding fit the cross section of the carrier perfectly.  I'd had the flywheel off before to take a look at what was going on in here before I decided to use an electric motor instead.  The shaft is pretty badly chewed up by the set screw, but that's of no matter for this project. 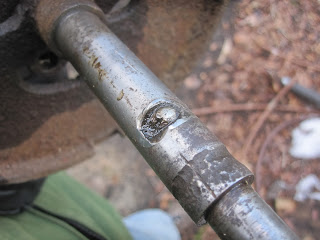 now, with the flywheel off, I removed the shoes.  I scrubbed the edge of the interface between the flange and the shaft with a wire brush and squirted penetrating lube onto it. 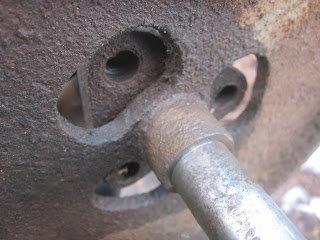 I whanged on it in the vise and it didn't budge so I gave it a bit of heat with a blowtorch.  Not enough to run up the colors, just a bit to get it to break the bond.  That did it.  I got a few degrees of twist.  oil, twist, oil, twist, repeat.  nothing more satisfying than freeing a rusty captive.

now for the carrier.  It's just a big lump of cast iron, so I'm less worried about breaking it than I was for the flanged disk.  My dad recently bought a harbor freight bottle press for replacing a few front end bushings on his trusty Volvo 240 station wagon.  It hemmed and hawed but upon freeing this part, it made a satisfying crunch-pop-whang followed by an ominous chorus of vibration from its springs. 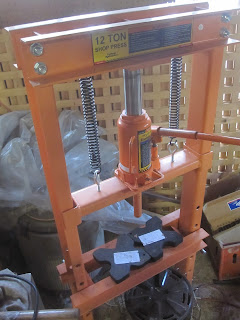 A similar story: oil and back and forth. 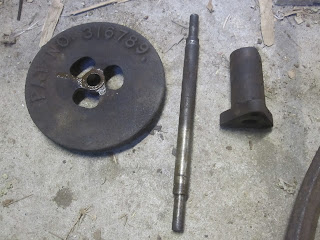 and back together again.

Next was the pulley on the blower.  It had a good inch of travel in one direction and I wanted an extra degree of freedom in aligning the flat belt.  The bearing housing (held in by one 3/8" screw) was easy to remove. 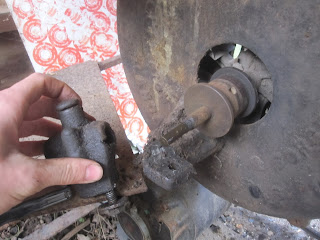 The set screw, a flathead, took some picking to remove the gunk and and some heat to break it free. 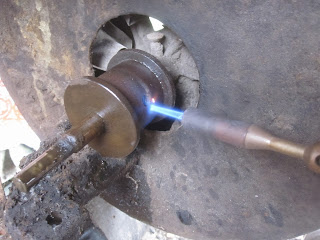 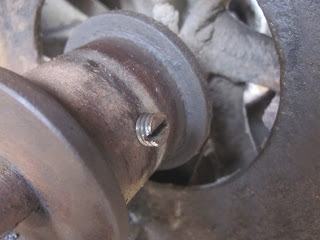 The threads looked good.  I got out the bearing puller, assuming that the pulley was rusted on, but when I hand tightened the lead screw, the pulley began to move. 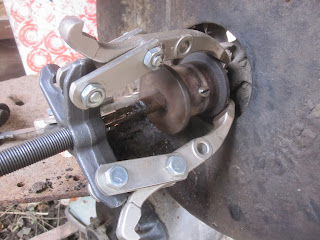 It came off with minimal effort. 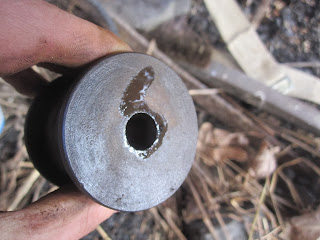 While it the pulley was off, I decided to take a look at the bearings. 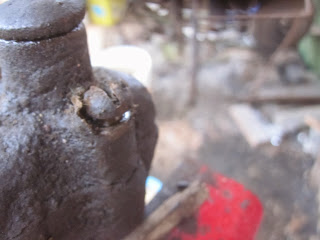 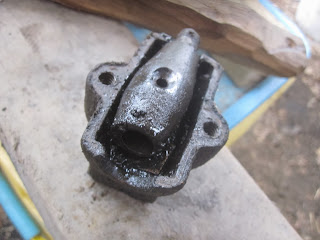 It looked familiar.  I'd seen it before when browsing other patents filed by the same guy.  Henry B. Keiper of Lancaster, PA was the founder of the Champion Forge and Blower company.  He patented this as an "oscillating bearing."  It's loosely constrained to accommodate non-ideal conditions where the two bearings are not perfectly coaxial.  The shaft is axially constrained by a threaded plug which is jammed with a mating nut. 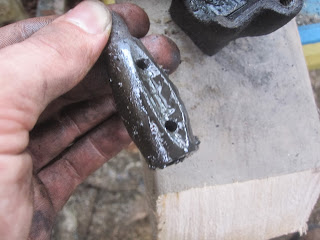 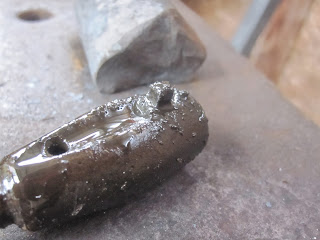 the side with two holes faces downwards and holds a pair of felt wicks which dip into the oil reservoir.  The wicks were mostly gone, so I stuck some new ones in.  I put everything back together.

Next, I made some hardware to move the lever action to a comfortable height.  The hardware consists of a couple of loops and a connecting rod to constrain the motion of the cast iron lever to the ball end to a wooden lever that the user operates. 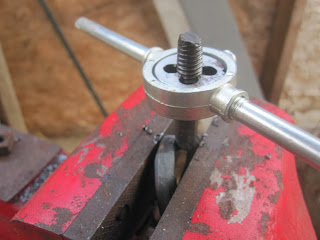 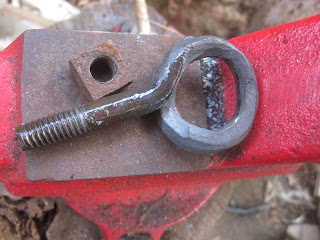 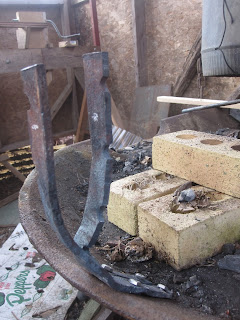 This bracket bolts on to the forge table and holds a big lever. 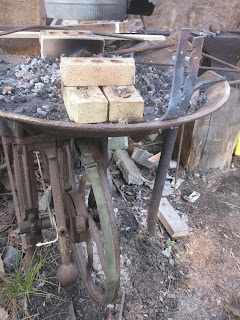 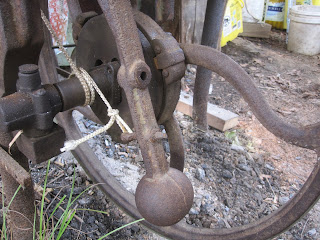 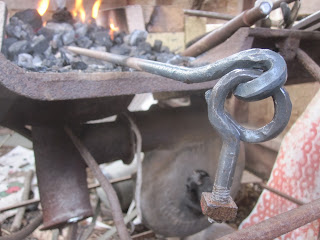 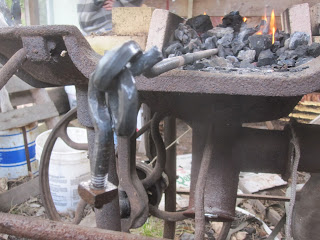 After belt alignment and Learning, everything worked well.