I took one of the big project classes in Course II (mechE) this semester, 2.007.  2.007 is Design and Manufacturing I.  The class is interesting because it attempts to teach you how to design and build mechanical things, in a semester.  That's a pretty ambitious goal, especially given that the class contains about 200 students with varying levels of experience in building stuff.  To give students a better chance of learning what they want to learn, 2.007 has a few separate sections.  This year, there were three.  The standard (and largest) 2.007 section is robotics, in which students build robots to compete in various tasks requiring clever mechanisms, dexterity, and programming skill.  The other sections offered in SP2013 were underwater robotics (led by Ed Moriarty and TA'd by djwise, among others), and electric vehicles, dubbed 2.00gokart.

yeah, that's basically a rolling frame.  Me and my much more competent teammate observed this, and decided to drop most of our cash on the power system. 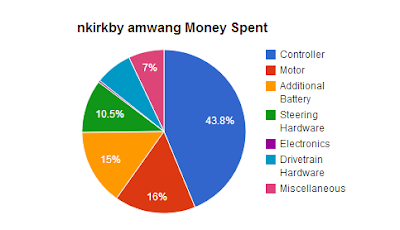 Optimizing for maximum power, we decided to see just how many watts we could get, given the course restrictions.  The three A123 packs we were given were assumed to be black boxes with a nominal voltage of 12V and a continuous current limit of 40A set by an internal fuse.  We were not allowed to stick more than three packs in series.  We were given the option of buying one more for an additional $75.  This leaves basically two reasonable options for the battery setup:
3S1P - 36V*40A limit = 1.44kW  - free
2S2P - 24V*80A limit = 1.92kW - $75

We opted to spend the extra $75 and purchase a controller/motor combination that could suck 80A all day.
enter.. the BIG KELLY
and the innocent Turnigy Aerodrive SK3 63-74 149kV

The rest of our vehicle came into existence around the power system.  Wanting to spend as little money as possible on everything else, we chose a compact design, favoring free and cheap materials where we could get away with them.  We went for a simple inverted tricycle wheel configuration while cramming the motor, controller, and batteries under the crouching rider. 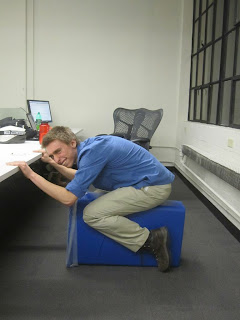 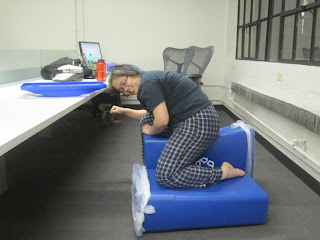 Early tests of rider positioning proved the ergonomics to be viable.


Using rudimentary measurements, we worked out some quick CAD to figure out where to put everything. 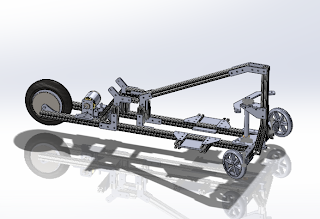 We used "free" fasteners liberally, and were very frugal when it came to anything not relating to the power system, like steering and brakes.
Because of the wonders of the internet, rapid prototyping equipment, unkul churlez, and synergy, our sweet ride came together swiftly. 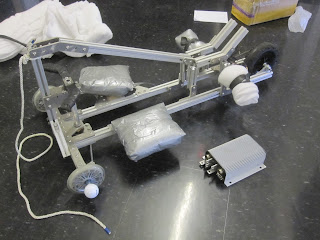 In preliminary testing, we couldn't get the BIG KELLY to break a sweat.  The SK3 was less happy.  It was never able to take more than 80A continuous from the controller - we know this because we never toasted any fuses with it, but it did get quite warm.   Between short runs, we would let it cool so as not to toast the insulation on its windings.

So, we made the logical choice and traded our motor for an equivalently priced (but now discontinued) melon.  The motor, surplus from melonscooter, had a unique, well aged feel that can only be described as "crunchy."  It only took a few hours to make the appropriate changes to our motor mount, and setup a new hall sensor ring.  The C-8085-180 happily gulped more current, and it would occasionally fizzle the fuses of half of the 2S2P arrangement during transient acceleration when flooring it from a standstill.

Now confident that we had come up against the hard stops of the course restrictions on power consumption, we were set for the competition. 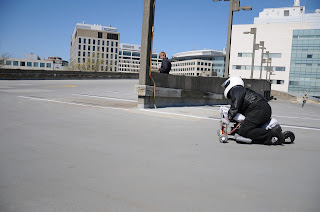 The drag race went pretty well.  We blew a few fuses, but eventually got the winning time of 6.9s.  We reached full speed fairly early in the 50m run, so perhaps we could have done better with a slightly higher gear ratio.  Burnout Chibi, this year's instructor vehicle, had excellent low end acceleration and top speed, probably due to its independent 2-speed gearboxes.

The garage run was good also.  Some rider calibration was necessary to figure out how to take the corners while maintaining speed without tipping over.  With only 18" between the two front wheels, care had to be taken to A) lean hard and turn wide, or B) slow down.  A wider wheelbase would have been essentially free for us to include, and we considered making the switch, but it we both concluded that mandatory weight shifting added to the thrill of the ride, and was worth keeping.  We placed second for time, landing 1:04.  We were a few seconds behind the impressively fast Roach Kart.  However, we managed to pull a better overall efficiency by a tenth of a Watt hour.  (basically a tie)

We're team e.
I'd attribute our loss in the race to our lack of turning ability.  Even though our vehicle showed the best acceleration (as evidenced in the drag race) we could not round the corners faster than our rival team. (team 0).  They had a wider wheelbase, and was able to make the turns with much more authority.
In theory, we should have been able to achieve a higher efficiency.  I attribute our failure in that regard to a noticeably sloppy drivetrain.  We had a difficult time centering our spur sprocket on the rear axle, largely because of its mounting scheme.  We attached it directly to the hub of the rear wheel, which uses four cap screws with captive nuts to squeeze the two halves together around the tube and tire.  We replaced the cap screws with longer cap screws, then put the appropriate holes into our sprocket.  Although the holes lined up fine, the sprocket was still off-center.  We failed to recognize the low tolerances in the injection molded hub of the wheel.  A better scheme would have been to use a bushing ensure concentricity of the sprocket with the rear axle.
We likely could have boosted the efficiency by choosing a belt drive over a chain drive.  However, hardware would have cost us about five times as much. 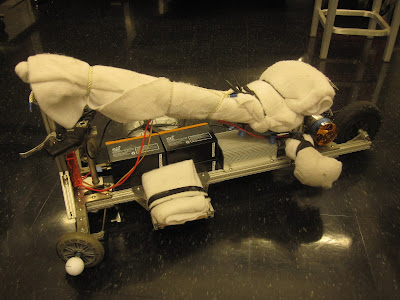 For me, this semester was about learning how to spend money on things.  I don't mean spending less money on things.  I mean spending more money on things and realizing that the value of convenience sometimes trumps the extra few dollars.  I've struggled with a problem of extreme frugality, mainly because there's so much cruft floating around MIT and I feel guilty buying more stuff.  As far as personal projects go, it's forced me to spend huge amounts of time debugging when I could have bought something much nicer for minimal capital investment.  This was an exception.  We bought things, and they worked.  Things sometimes work when they're pulled from a cruftpile, and sometimes they don't but only take minimal repair to fix.  That can be immensely satisfying.  Another factor is convenience.  Many times have I waited on buying parts, anticipating that they'll show up on reuse or something in the future.  Sometimes they do, but most of the time I'm caught in my own stubbornness and projects end up getting put on hold.
tl;dr
can't cruft everything -
spend a bit of money, save a lot of time.

thanks to my immensely devoted lab mate, amwang