After much wishing I had some hardy tools, I made some hardy tools.  These tools fit in the square hole in an anvil.  Hole sizes are nonstandard, so it's often worthwhile to make your own.  Smiths typically make their own tools anyway. 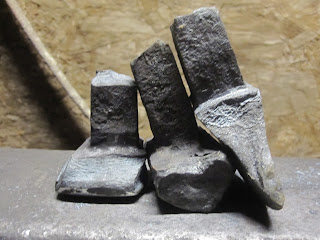 The cutoff tool.  Drawn to an edge and filed sharp, this tool is used to cut hot metal.  The workpiece is held above it and hammered into the cleaving edge.  This tool frees up the hand that might otherwise be holding a chisel and allows it to hold the stock.  Always remember to remove your cutoff tool when not using it to avoid cutting yourself.  This one has a curved edge because I believe that the curve makes it easier to cut through large diameter stock.  Also, a curved is easier to shape than a flat edge given my starting geometry. 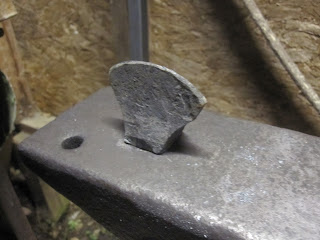 This is a fullering or swaging tool.  It spreads the metal in the direction perpendicular to the ridge.  This makes drawing out into a faster operation. 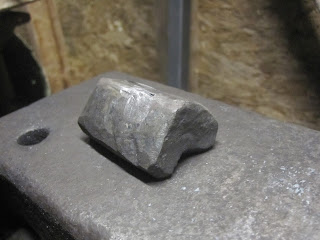 I don't have a legit name for this tool.  I made it because my anvil is pitted and I needed a smoother surface to hammer on.  It's very slightly convex because that's easier to make than perfectly flat or concave.  I filed it smooth and left it soft. 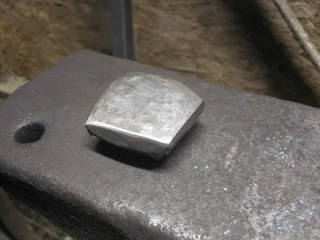 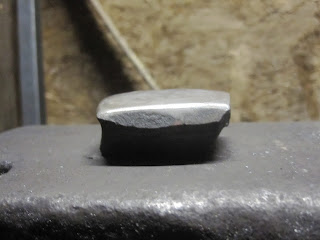 Here's a video showing how I made one of them. They're all started the same way.  All tools were cut from a length of 1" square stock.  The first operation is called upsetting. It means you bash a piece of stock on to itself to make the cross section bigger.  I used a short section of railroad track as a floor-level anvil.  The weight of the stock was such that I could slam it down on itself.  In other cases where the inertia of the stock is limiting, it may be preferable to whack the other end of the stock with a hammer.
Next step is cutting off.  I used a chisel (jackhammer bit, cheap from scrap dealer!) because I didn't yet have a cutoff hardy.
After that comes drawing the taper.  The stock should be tapered so the bottom fits into the hole.
It is later dropped in the hole while hot and seriously whanged on with a sledge hammer to adopt the shape of this particular anvil's hardy hole.

After that, the stock is shaped to become whatever tool it may be.