back in the summer of 2011 I made an mbira.  It's a lamellophone with roots in Africa.  Notes are created by plucking rigidly held metal strips of different lengths. 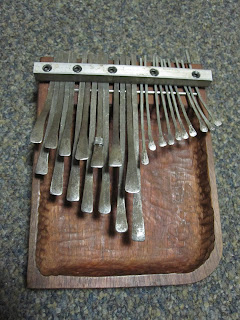 The body is a single piece of bloodwood, chiseled out in the middle to make a resonating membrane.  It's still not very loud (probably because I didn't get it thin enough), but it can be made much much louder by pressing it against a hollow object like a trash can or a table or anything stiff and light really.  Traditionally, these instruments are wedged inside gourds or wooden boxes to amplify them.

The tongues on the right are made of bicycle spokes, and the ones on the right are made from tines of an old rake.  Both started as round stock, so I hammered them out to make them into the shapes that they are now.  I used steel from those sources because both bicycle spokes and rake tines are made of spring steel.  It's springy, a major plus, but it's also a lot tougher than mild steel.  It was tempting to forge them hot, but that would have removed the temper and any attempt at retempering all of the tines consistently would have been futile.  Cold forging was a humbling experience - it took at least a week of the summer for all of the tines to be shaped. 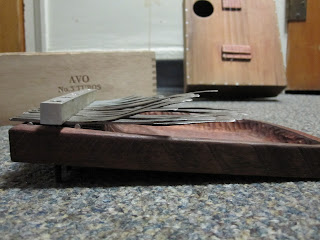 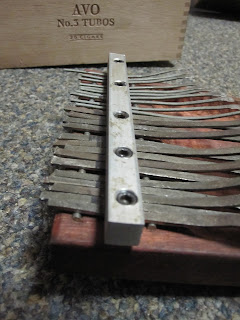 A chunky aluminum bar presses the tines between two metal rods.  It's under an immense amount of pressure, so bolts are spaced closely. 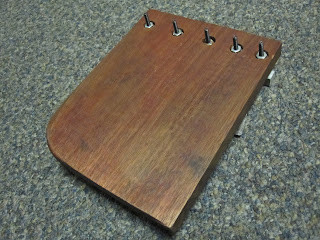 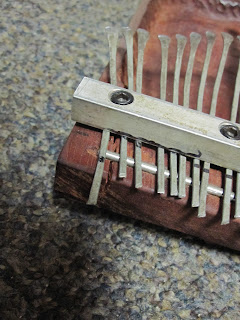 Not too long ago, it developed a good sized crack on the side of the high notes.  I'm thinking it's just normal movement of the wood.  It hasn't affected anything noticeably yet.

Oh, I forgot to mention, tuning is Bb mixolydian, in a layout similar to this 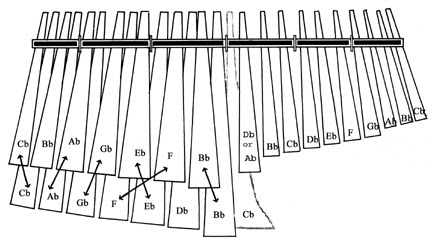